Jean-Luc Brédas received his Ph.D. from the University of Namur, Belgium, in 1979. 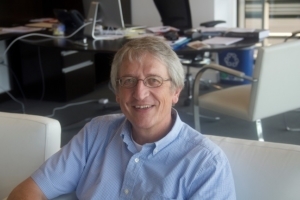 In 1988, he was appointed Professor at the University of Mons, Belgium, where he established the Laboratory for Chemistry of Novel Materials.

While keeping an “Extraordinary Professorship” appointment in Mons, he moved to the US in 1999 and became Full Professor of Chemistry at the University of Arizona.

In 2003, he moved to the Georgia Institute of Technology as Full Professor of Chemistry and Biochemistry.

In July 2014, he took a 2-½ year leave of absence to King Abdullah University of Science and Technology (KAUST) where he served as Distinguished Professor of Materials Science and Engineering and Director of the KAUST Solar and Photovoltaics Research and Engineering Center.

At Georgia Tech, where he resumed his activities in January 2017, he is Regents’ Professor of Chemistry and Biochemistry and holds the Vasser-Woolley and Georgia Research Alliance Chair in Molecular Design.

He is a Georgia Research Alliance Eminent Scholar since 2005.

Jean-Luc Brédas is a Member of the International Academy of Quantum Molecular Science, the Royal Academy of Belgium, and the European Academy of Sciences.

Since 2008, he has served as an Editor for “Chemistry of Materials”, published by the American Chemical Society.

The research activities of the group deal with the structural, electronic, optical and interfacial properties of novel organic (nano) materials with promising characteristics in the field of electronics, photonics, and information technology.

Our work is devoted to theoretical investigations based on powerful computational techniques derived from quantum chemistry and condensed-matter physics.

With such an approach, we are able to model compounds and materials reliably in order to understand and/or predict their electronic and optical properties.

The major part of our studies involves polymer and oligomer materials (plastics) with a π-conjugated backbone.

Our goal is to determine the nature of the physico-chemical mechanisms leading, for instance, to: high charge-carrier mobilities in the semiconducting or metallic regime; strong luminescence or photovoltaic response; outstanding nonlinear optical properties; specific surface interactions with other materials, such as metals or conducting oxides.